Have you ever dreamed of being a detective? I’m not talking about the hyper-cool, one-liner spitting, guns-blazing ‘John McClane’ type of detective, but the guy who has to interview witnesses, record statements and use his brain to figure out the intricacies of a case.

If you have, then Her Story is the game for you. If you haven’t, but want to play something very different to the norm, then you should play Her Story. In fact, just play Her Story; it will only take you a handful of hours, and you will be immensely rewarded for your time.

Her Story is a new game from the creator of Silent Hill: Shattered Memories, Sam Barlow. You use the search function of a police database to look up video segments from a series of interviews with a woman. This women has had a tragedy befall her, and it is your job to figure out what happened from her story, seen from these clips.

Brilliantly, the game doesn’t actually show you the detective or detectives in the room with this woman. She interacts with them at times, and is clearly being asked questions by someone, but the conceit that the detective’s side of the video has been lost due to a flood means you only get her responses and incidental stories to what the detectives are asking. You never get to hear the questions, or anyone’s voice but the woman’s. 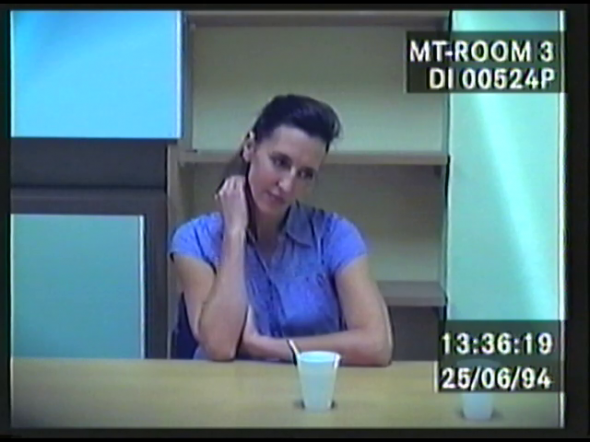 Who is she? and what happened to her?

This is great because it actually adds to the level of immersion you feel. You become engrossed in the tale being told, the mystery being unraveled before your eyes. I couldn’t help but want to find the next unseen clip, to figure out what happened and why. Games such as L.A Noire where you are controlling someone clearly visible with their own personality don’t get this much investment, simply because it feels like you are playing their story, not that you are part of the story unfolding.

It is a fantastic design decision, one that marks Her Story out as something a bit different. What further reinforces this is that the video clips are all live action. Yes, you heard right; an FMV game has been released this year and is something genuinely unique. The gameplay might not sound like much, and to be fair there is very little else to do apart from search the database, but this is absolutely a case of ‘less is more’ being used to full capacity.

The interviews take place in 1994, before the internet was properly a thing, the smartphone was barely a twinkle in Steve Job’s eye and a ton of people reading this were born. The interface for the game shows this perfectly; it feels like Windows 95, with the lines on-screen and the slight reflection of room lights on the CRT monitor you are supposedly looking at giving the whole game a brilliantly dated look that fits it perfectly. For the younger ones, look those things up, or just go play the game. 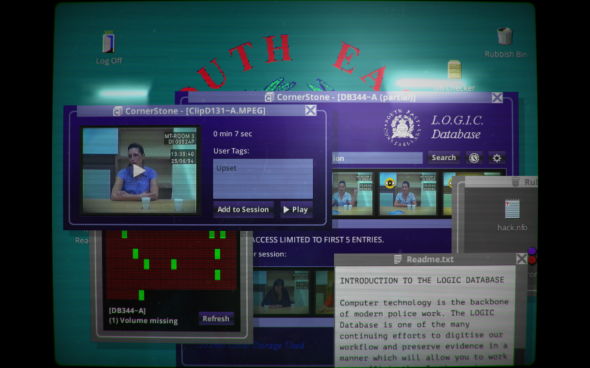 You have the ability to add your own tags to the clips, which I think I may have been using wrong since I was using them more as notes for my own detective work. This allows you to look up the clips by what you wrote or the tags already embedded in the clips. So typing words like ‘house’ or ‘living room’ will generate the first five results of videos containing those words. The nature of the multiple interviews will mean you might get clips from each one, or all from the same session. It’s your job to figure out what happened, who did what, and who is guilty.

I am trying to be as vague with my description of the game as possible, because I don’t want to spoil it. The deduction is the draw, and it is up to you figure it out with no outside help. It is entirely possible that what you think happened is totally different to what I think happened, or what someone else thinks happened. Her Story is a game that promotes discussion after the fact, because you can play for as long or as little as you like, and depending on where you stop, you might feel differently about the story to how I do.

It’s not perfect, however. Since the clips are acted out by a live person, they can feel somewhat scripted at times. I know that might be a dumb thing to say, but the acting can come off as poorly done in some clips. I will say this, though: I took that in the game’s favour. As the version of events my play through was giving me unfolded in my head, these segments made more sense in context, but being in ‘review mode’ meant I could also see why it might put some people off.

That’s because it is. Her Story isn’t a game about blowing stuff up, or a tight, heavily scripted narrative that takes you along one path. It is a game that gives you the tools to piece together a story and see where it takes you, and where you end up might just be different to those around you.

It’s a game that sets out to do something different and absolutely succeeds. Moreover, it is less than the cost of a cinema ticket and will probably provide you with more entertainment during its run time than the mass of sequels and remakes Hollywood is producing. If you are looking for something unique, something genuinely cool, then look no further. Play it, and let’s compare notes.