If you’re wondering why a Teslagrad review now, it’s semi-recently come to the PS Vita, so I’ve had the pleasure to take a look at it on the handheld. Having read reviews from when it had released on Wii U, I was quite looking forward to giving it a try, and in the main, am glad I did, with some minor reservations.

Teslagrad is a 2D puzzle platformer where progress relies on an increasing repertoire of powers, all gained by collecting items you find as you make your way through a tower to battle the evil King ruling the land.

The first thing that struck me about Teslagrad though was the simple beauty of the graphics. They’re nothing short of lovely; clearly hand-drawn, and they never get tired. Safe to say I am a big fan of the visual, and they look particular lovely on that awesome Vita screen. The sound and music don’t hurt either, fitting nicely, and engendering a sense of nostalgia throughout.

This nostalgia doesn’t just come from the look and sound of though, it’s in the gameplay as well. There is little hand holding here, progress is a matter of learning the patterns of moving instruments of death, working out where you need to jump to next, plus the odd leap of faith. Death comes quickly and often, but fortunately one tip of the hat to modern game design is that restart points are never far away, with several sometimes in one room. 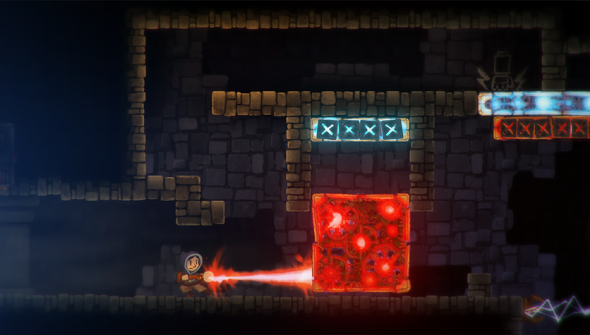 I’ve never had a major issue with this style of game having grown up in the 80s but, on a few occasions, learning and methodology became an exercise in major frustration. I will call out a section in particular where you have to float up through a bunch of electrical obstacles, using a teleport skill – think “blink” in Dishonored – to avoid certain death. At times, quick reactions and accuracy are essential, but the controls are, as one might expect, a little floaty; a little too floaty in fact. The final boss battle proved very frustrating too, flitting between sections that became so easy I barely had to concentrate, and sections that were ridiculously tough. Of course we’re not in Dark Souls territory here though so I got there in the end, and in spite of my annoyance, I’m glad that I did.

I’m glad, as while the story is one we’ve all seen, read or heard many times before, the way in which it’s told is utterly charming; basically, a King rules the land, gets drunk on power and turns evil, and your character has to stop them. There’s no speech at all, instead, it’s told through incidental moments; theatre rooms dotted throughout the tower where you can stop to watch puppet theatre re-enactments of the King’s fall from grace, and scrolls that are hidden in hard to find places depicting the same. Given the loveliness of the graphics, this works extremely well, and it was actually nice to see a title not reliant on speech. 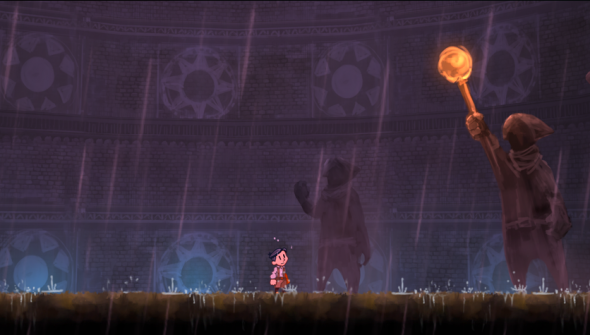 As you may expect from a game name-checking Nikola Tesla, electro-magnetic powers play a large part in the puzzles you have to solve, with red and blue acting as opposite poles, attracting each other, but pushing away anything of the same colour. A glove that’s collected along the way allows you to change certain objects between these colours, and a cloak allows you to surround the boy in a field of red or blue as well. Combining these can make him stick to surfaces, or fly up in the air.

As things get more complex, it’s sometimes necessary to quickly switch between colours to progress. I have to admit I found it all a little mind-bending in later sections at times, although we’ll put that down to my own limitations rather than being any fault of Teslagrad as, for the most part, the puzzles are planned out very well. The only comment I would make is that this reminded me a great deal of Outland, although in fairness the interaction with red and blue in that title is handled very differently.

Teslagrad is a title of opposites; blue and red, intricacy and simplicity, enjoyment and frustration. While there certainly is much to enjoy, with some clever game design, the lovely graphics, and the simple, well-trodden, but nicely-handled story, it’s ultimately the frustration that stops this being an outright recommendation from me.

That said, if you enjoy this sort of game, it’s undoubtedly worth a try for the few hours it takes to complete.