This is probably one of the hardest reviews I will ever write. Not because That Dragon, Cancer is a bad game, or that I have put so much onto it that it can’t live up to expectations, but because of what it’s about.

It is an autobiographical game focusing on Joel Green, a four-year-old diagnosed with cancer. The game was made by his parents, and tells the family’s journey during Joel’s four-year battle. Brave and bold, it is a game that everyone should play.

This is a story told through poetry, cuts from what sound like real home movies, and voiced sequences. It chronicles a path of grim determination, hope, faith and sorrow. Some parts hit home better than others, but you should absolutely play this.

That Dragon, Cancer is closest to a modern point-and-click adventure in terms of how you actually play it. That is a fairly reductive way of putting it, however, as it’s deeply surreal at times, but uses metaphors for the total headfuck that would result from having your baby diagnosed with cancer.

A father holds his son…

It is controlled, save for one spot, entirely by the mouse. Moving the cursor around changes perspective, and left-clicking interacts with things, leading you to move around the room, pick something up, make Joel laugh; this is a brilliantly simple method. There’s no taking an age to learn complex controls, and if you want to show it to someone you know (and you should), even if they don’t play games, it can be easily picked up.

A lot of the story hangs on the family’s faith, hoping for a miracle from God. As someone who doesn’t believe, this didn’t necessarily throw me out of the game, but made it hard to resonate with fully. It is not something I have ever considered to be part of my life, thus it falls flat here. To be clear, I am not begrudging the family this faith, and to be honest if I was in the same situation I might well do the same. This is very much a ‘your mileage may vary’ situation, and it might make the game even harder to play for some.

This is because the emotional weight behind each scene is akin to a wrecking ball. The notion of games that make you cry has been around for some time, but I think this one is probably the game that will push most over the edge. One scene in particular had my heart beating hard, eyes filling, and I found myself clicking the mouse faster, moving around the screen to interact with everything I could just to try and get beyond it.

It hit home because while, touch wood, my daughter has never been diagnosed with anything, I have been in the situation where all I want to do is get her to calm down, not be in pain, and to sleep. From my perspective this is just so we can all get some sleep as she is teething, but that feeling of helplessness, of knowing she is in pain and not being able to help save for offering comfort, soft words and Daddy hugs, is heart-breaking. 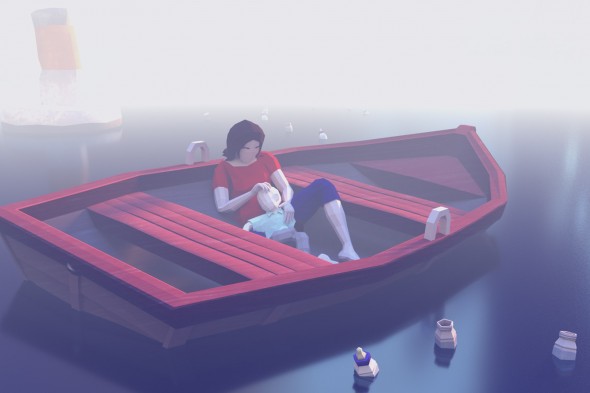 His mother strokes his head softly…

How the hell Joel’s parents coped is completely beyond me. I have never met them, never will, and they will probably never read this, but they have my sympathy and my utmost respect. That Dragon, Cancer is only a snapshot of what happened to them; I cannot imagine the real thing.

That Dragon, Cancer is deeply surreal throughout, with a truly unique art-style. The areas are brightly coloured, but with strange angles. Jet black trees vibrate, seeming like obstacles in the player’s path until you realise just what they represent. The character models have heads made up of squares, with no mouths or eyes, but story, excellent use of mechanics and camera angles mean that they convey more emotion that a lot of photo-realistic characters in AAA games.

The music is haunting where it needs to be, and silent at the right times. The whole package adds up to a game that has stayed with me long after its two-hour playtime, and even at this early stage is a contender for my Game of The Year.

Really? Game of the Year?

This is how highly I think of it. This is a brave game for someone to put out, a game that is literally opening their lives to the mass market and letting people like me attempt to critique it, a feat that even if I were to make games, I am not sure I could bring myself to do.

It might not completely hit home for me, but it might for you and strikes me as a game that will affect everyone differently. Enough hit for me to give the game high praise, and at just two hours long it is more than worth your time to find out if it will for you, too.