Ready at Dawn’s exclusive PS4 offering, The Order: 1886, takes us to an alternative Victorian London, where an Order of Knights do battle with both man and beast. It’s a beautiful cinematic experience, but not without its flaws – the most controversial of which is its length, or lack thereof. Whether that really matters, though, is a point of conjecture.

The Order: 1886 was first shown at 2013’s E3 conference and whet our appetite for an alternative, Steampunk themed, London, protected from a mysterious foe by a secret Order. As more details were released, there were concerns that the beautiful cinematics were going to be overshadowed by what seemed to be a generic third-person, cover-based shooter.

Now that it has been released, were those concerns warranted?

There’s no question its gameplay consists of Quick Time Events, and shoot-outs where prudent use of cover is necessary. You do so, however, in a wonderfully developed universe, which at times takes your breath away, full of historical references and legend.

You play the role of Sir Galahad, a member of Her Majesty’s Order of Royal Knights, whose mission is ‘To preserve the balance between man and half-breed’. Steeped in Arthurian legend, The Order must not only continue their long-term battle against their half-man, half-beast enemies, but also counter the rebel forces occupying the underbelly of Whitechapel.

The story, although sometimes predictable and generic, still remains an interesting tale, enhanced by the universe within which it has been established. I won’t go into further details through risk of spoilers, except to say there’s a number of moments when the penny drops and you say ‘Oh, I see what you did there’. 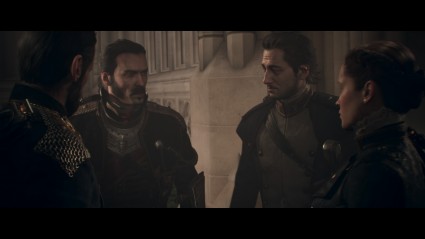 Throughout The Order: 1886, you’ll not only encounter a Victorian London that may have been, but you’ll also come across various historical figures. Nikola Tesla, for example, is your armourer, and is responsible for most of the technology at your disposal, along with a humorous nod towards his long standing rivalry with Thomas Edison. You also hear murmurings of a mysterious Jack the Ripper roaming the streets, and a ‘blink and you’ll miss it’ reference to Sherlock Holmes.

The technology in The Order: 1886 is quite impressive, in a Steampunk kind of way, complete with ample brass and leather. Weapons such as the Arc Gun and Thermite Rifle are fun to use, wreaking an appropriate amount of destruction; disappointingly, you just don’t get much opportunity to use them. It seems you start to get a taste for them before they’re ripped from your grasp and replaced with more generic rifles and shotguns. Other gadgets such as lock picks and the TS-27 Inverter/Rectifier are nice inclusions, even if they too are under-utilised. For the record the lock picking mechanic is one of the better ones I’ve seen.

You can’t discuss The Order: 1886 without mentioning how it looks, which is spectacular. The 16:9 aspect ratio is further letterboxed to give a widescreen cinematic feel, and I thought it worked well. Some scenes even had a patina in the foreground, as if you were actually watching it through a piece of glass – such as, say, a camera lens. There are no loading screens and everything transitions smoothly from beginning to end, to the point where I often wondered whether it was my turn to do something, or if it was still a cut-scene.

It’s no doubt that Ready at Dawn wants The Order: 1886 to be a cinematic experience, obviously believing that giving you too much freedom would require compromises in presentation. Consequently, you are tightly controlled, following a set pathway through the environment. There’s some incentive to wander off the beaten path when you can, but the rewards amount only to curious photos, newspaper articles, and audio logs. These can give further background to the story, and the occasional chuckle, but they’re not essential to the experience. I often thought ’Is that all’ when one was discovered. This is a pity, because it’s a world that’s just begging to be explored. 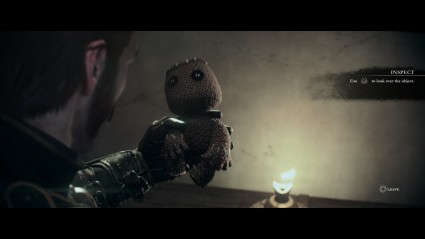 I had no idea Sackboy had been around for so long…

Gameplay seems to play a minor role in The Order: 1886; that’s not to say it’s bad, it’s just uninspired. You’ll find yourself walking down a path, then a cut-scene, then a bit more walking, then a QTE, then a gun fight. I found the QTEs acceptable and relatively painless – not some of the exercises in frustration you can find elsewhere.

For me the shooting felt good, with the weapons carrying a good weight to them. There’s always cover aplenty, as well as a range of weapons and ammo readily available – often just not the really fun ones. I experienced some issues with cover where I couldn’t crouch behind something I considered obvious, and had some major slowing issues during a firefight on a bridge, but that was it. The shoot-outs appeared to follow a similar formula, except for the Lycan beasts which incorporated a QTE to allow you to dodge incoming attacks. Major Boss battles were also mainly QTE inspired affairs.

Now the matter everyone is talking about, the length. I completed The Order: 1886 in under nine hours, but I explored the entire universe and spent longer on some battles than I probably should have. In a time where we see games padded out to give a longer experience, I’ll admit to being pleased to read about The Order: 1886 being shorter than typical. Your path is clearly marked out with little chance to stray, with no superfluous additions for the sake of it; I didn’t find myself asking ‘Are we there yet’? For this reason I can see a lazy Sunday in the future where I put The Order: 1886 back into my console for another quick blast. Compare that to Assassin’s Creed: Black Flag where I got about half way through and had enough, quickly finishing the story missions with no desire to revisit it. 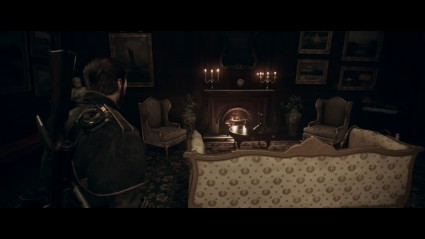 The only sticking point is whether The Order: 1886 presents value for money considering its length and lack of other features such as multiplayer. Cost is rarely a factor we consider when reviewing on this site, but I think it’s relevant in this case. Being a premier title, it attracts a $100 price tag here in Australia, the same as its content-rich competitors.

I would be reluctant to recommend spending that much unless someone was really keen to see what it was all about. If the price was halved, I would say jump at it, but at full price it’s questionable. It’s a difficult proposition. There’s no doubt The Order: 1886 is a high quality product, but paying at least $10 per hour of gameplay is a bit of a tough sell.

Sure, it’s beautiful, but is that enough?

Ready at Dawn had a definite goal in mind when they developed The Order: 1886, and that was to give more of an ‘experience’ than a game. Whereas most developers focus on gameplay, with a story built around it, The Order: 1886 takes the opposite approach. The focus is on the environment and the lore, and we merely play a small part; I am totally cool with that. It’s an approach which has served Quantic Dream well with Heavy Rain and Beyond: Two Souls, which are similar, albeit lengthier, experiences.

I loved my time with The Order: 1886. For me, it struck a good balance between story, gameplay, and length – especially for those of use who can no longer sit playing for days on end. It’s not perfect and the drive to be cinematic tended to be limiting at times. That said, Ready at Dawn’s vision for an alternative London is full of potential, and I hope they continue to build on it. I’ll gladly be back for more of the same.

The question is whether it’s worth paying full price, and that’s the only thing that’s stopping me from giving it a whole-hearted recommendation.