It’s funny how one of my most anticipated games this year rolls in at a mere 18 megabytes. Of course size isn’t everything, but when you consider some demos breach the 2GB mark, it’s clear times have changed.

I grew up with Konami games in the Arcades, and getting the chance to own Turtles, X-Men and now The Simpsons is like a dream come true for my inner retro-enthusiast. Not only can I relive my childhood, catering to the longing pangs of a cherished yesteryear, I’ll finally be able to see the end of a beloved arcade game without having forced my parents to take out a second mortgage.

They’ll welcome back those jingling pockets with open arms, I’m sure.

Don’t have a cow, man…
This one is pretty special as it’s the first game to ever feature The Simpsons. Yes, even before Bart went around spray painting Space Mutants and Krusty played Pied Piper in a Funhouse. Players are cast as either Bart, Lisa, Marge or Homer in a race against time to save Maggie from Smithers.

Why has Smithers taken Maggie? The unassuming baba has managed to get a stolen diamond stuck in her mouth, and rather than being practical and just taking it back, Smithers decides to baby-snatch at the same time, courting her off into a hot-air balloon. Irked by this, the Simpsons family decide to fight back through a series of well-dressed goons, drunken goofs, sore-headed bears and masked ninjas.

Frankly, the story doesn’t get much better the further on you go. Flying to Krustyland from Downtown Springfield, then falling through the floorboards to a Cemetery that leads to Moe’s Tavern, which then somehow backs out onto the Springfield Butte. I’m no geographer, but I’m pretty sure that’s some seriously implausible mapping.

I’m awful for picking plot-holes in a twenty year old game, I know. I certainly wouldn’t have thought about them as a six year old, but they’re hard to ignore when you’re coming back with a more mature mindset, assessing them for review. 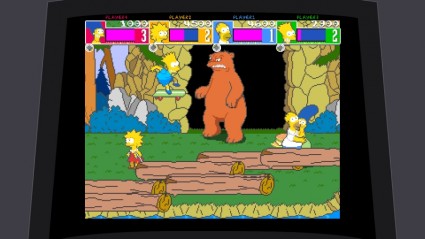 The Simpsons vs. A bear

Let’s go for it, man
Each Simpson has a different fighting skill which is very befitting of their character. Bart smacks his enemies upside the head with a skateboard, Lisa whips them with a skipping rope, Marge cracks out the hoover and, of course, Homer uses his fists.

The game plays out exactly the same way as the old Turtles Arcade game, side-scrolling beat-em-up that requires you to tap one button nonsensically like a brain-dead idiot so you can reach the end of the stage. No blocking, secondary attack, or special moves, just punch and jump. You certainly won’t get the strategic groundwork of a Soul Calibur V here.

The game was a bit of a groundbreaker, however, as it introduced team-attacks. Basically, the kids can jump on the back of their parents and both can attack simultaneously until they’re knocked off. A concept which, as I’m sure you’ll agree, has been used to great effect over the years.

Unfortunately, because of the limited buttons available to you, the game does play out quite repetitively after a while. In that regard, it hasn’t aged at all well. 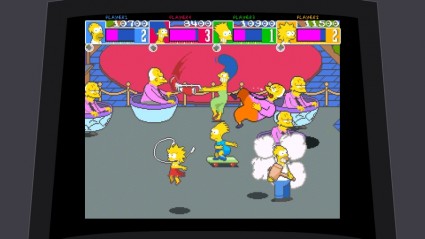 Anyone know who this old guy actually is?

Do the Bartman
Naturally, a twenty year old game is not going to blow you away with stonking visuals. That being said, The Simpsons Arcade doesn’t look ugly. The characters and environments are completely identifiable for fans of Matt Groening’s vision, and emit vivid memories of sweet, candy-floss smelling arcade-rooms, filled with machines beeping and children laughing.

The screen has been shrunken so it gives the ‘game in an arcade cabinet’ feel, but you can stretch to fit the screen. However, this does look quite strained, and really doesn’t compliment the overall game.

Humorously, some very subtle jokes are included in this release, including Marge with Rabbit Ears, and characters from a previous Matt Groening cartoon. Very few people would have picked up on them in the arcade, but under scrutiny now, it’s actually quite incredible to see the minor touches that were put into the game.

D’oh!
Even though the sound quality isn’t crystal clear, the original voice actors all play their part in this game. The dialogue is limited, though, and basically boils down to ‘Maggie’ but it’s nice to know Konami were able to get some authenticity.

Frankly, with your ears full of BIFF and POW, the sound quality isn’t all that important. It is, however, very appropriate for an old arcade-em-up, and ultimately benefits from not being put through the washer for ‘remastered treatment’

What the hell are you looking at?
The game features fully online co-op that works really well, and will probably encourage people to pick this up multiple times. In my playtime, I didn’t notice any slowdown or lag issues; in fact the game ran smoothly throughout. The Simpsons Arcade handles four players very easily over Xbox Live, and I’d heartily encourage it. Having four people playing this at the same time really does stoke those nostalgic flames. 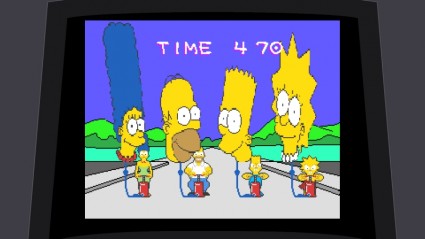 Mmmm… Donuts…
Some might say 800 Points is steep considering one playthrough can be finished in less than 30 minutes. Some might even argue this it isn’t worth purchasing if you never experienced it as a kid. Both of those points are probably true, but for me personally, I had a smile on my face the whole time.

No doubt about it, games have come a long way in twenty years, but they still have a lot to learn from the charm and community spirit of gems like The Simpsons Arcade.