When it is bad though, you make a game like Zombie Army Trilogy. The latest title from Rebellion is a perfectly working, competent game, ticking all the boxes it must to do exactly what it sets out to for a third person shooter. There just isn’t any soul.

Zombie Army Trilogy takes place in a alternate universe World War II where, having been all but beaten, Hitler (the scamp that he is) orders activation of ‘Project Z’. The title gives away what happens next, and you guessed it, lots of zombies arrive to kill or be killed, quickly overrunning Germany.

You play as a survivor, taking on the role of one of a few characters you won’t care about – partly because there is no story to speak of, and partly because they all play exactly the same. From there you select your armaments, which consist of a rifle, a secondary weapon, a pistol, and a handful of explosives such as grenades and trip mines. 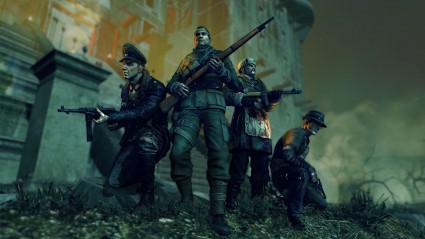 The survivors are… human, I know that much.

At first, it is really strange to have your primary weapon as a sniper rifle. Getting used to having to aim down the scope and take enemies out from afar is an interesting change from the norm, and while it proved incredibly frustrating the first couple of times I played, I soon got used to it and how to manage the crowd effectively to make the weapons work.

For a time, the game was fun, and working your way around the levels dealing with the good number of enemies thrown at you was cool. That quickly fell away when you realise that you move to an area, some enemies spawn, you kill them, then move on. This is the way the whole game goes, and after a while it just gets boring.

Zombie Army is laid out across two game modes and three episodes, which make up the trilogy of the title. These episodes are in fact remastered editions of DLC for Sniper Elite V2 and a third, previously unreleased act. You can play the game solo, in single-player, making your way through each area of each episode taking out zombies until it is time to move on, which is to say, when they are all dead… again.

Playing solo is the worst way to play the game, though, giving very little context for what you are doing. It becomes a dull shooting gallery where you have to kill everything you see before you can move on, only to do it all over again. Playing on default difficulty can lead you to get overwhelmed easily in spots, and given that the rifles simulate how wind and gravity affect the bullets, it can be really easy to miss and get taken down. 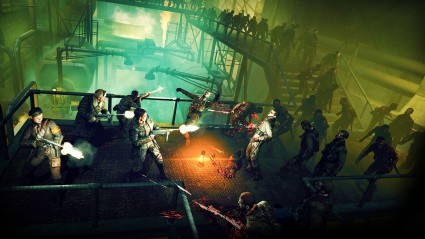 This is compounded by the fact that ammo can be scarce. Sure, you can loot bodies, but I found it was rare that I got the ammo I actually needed, instead picking up pistol ammo that was immediately dropped because mine was full.

Overall, it is a weird combination of action game with survival horror tropes, and didn’t really make for a fun time, providing more than a few cheap deaths and destroying any power fantasy you might have built up.

Bring this mode online, though, and things do pick up. The game allows four player co-op and because you don’t have to deal with everything yourself, it becomes more manageable, allowing you to focus on what needs killing rather than what’s off to the side and sneaking up on you.

I found it to be a smooth experience online; games were created with ease and I always had someone to play with, lag being only rarely a problem. The major problem with the online experience stems from the core mechanics, because simulating a realistic sniper rifle shot is all well and good, but missing what you thought was a perfectly aligned head shot because the game decided the wind wasn’t right is just frustrating, especially when ammo for other weapons is a rare find and multiple zombies are bearing down on you. It gives the illusion of lag when there isn’t any, bringing the whole game down.

The other mode in the game is horde mode, and yes, it’s the same as you have played hundreds of times before. The problem here, though, is that if you actually sit down and think about the game, it is one big horde mode, except the ‘campaign’ makes you move to a new area before spawning a new wave.

The actual horde mode does the same thing, except it confines you to one area before spawning a wave. Given this revelation, the amount of content is a bit lacking. Sure, it will take you some time to play each episode, but to play in the best way – online – you would have to tweak the settings to take you to the exact place you left so you can continue every time you boot. Even then, the story is so lacking of any kind of context it’s not worth doing. Just set it all the ‘any’ and see what you are dropped into.

Kill to move on.

In all other respects, Zombie Army Trilogy is a well made game. No lag online to speak of, graphics fit the context and the camera doesn’t fight you at all. The sound is mostly okay, with guns feeling meaty and enemies suitably horrifying. It does throw some stomach-wrenching sounds at you out of the DualShock 4’s on board speaker, which can really freak you out if playing in a dark room at night, but that only happens a couple of times before you no longer realise.

So, kill them all?

Yes, until you get bored and put it down. Play online at all times, and just have fun until you don’t anymore. That might not justify the full money the game is asking, but that is something you will have to decide for yourself.

Ultimately, Zombie Army Trilogy is a by the numbers game that presents you with stuff to shoot, isn’t broken in any way and can be fun for a short time. Yet both game modes are essentially the same thing, there isn’t anything noteworthy in terms of mechanics or story, better co-op games have come out recently, and it lacks the kind of soul and heart that could have made it cooler. I’d advise you wait for the price to drop before investing.