Over the past decade or so, PopCap games have taken the idea of casual gaming to previously un-thought of heights. They are now at a point where their games are at the forefront of almost every gaming platform known to man (or woman), from internet and social media sites right down to smartphones and hand-held consoles.

The vast majority of these titles sit comfortably in the puzzle category and are incredibly simple in structure, offering a gentle challenge and an uncanny knack of making you play just one more game. The original Zuma was a shining example of this, and the recently released sequel Zuma’s revenge looks to build on the ball-firing addictiveness of its predecessor. Read on to find out if it succeeds.

Zuma’s Revenge sees our friendly frog shipwrecked on a volcanic island where Tiki gods rule and are hell-bent on destroying him. The weapon of choice for the gods is a chain of multi-coloured balls designed to send our amphibian hero mad. You must battle against the gods while harnessing the power of the spirit animals to escape this treacherous land and return to some sort of freedom.

Chain reaction
As with the original, the general aim of the game is to clear the level of balls by making a sequence of three or more of the same colour. To do this you fire the balls from your mouth into the moving chain going around the level. When you clear balls, the chain moves backwards to become complete. The real trick is to work it so that when it does that, it creates another link of three or more, thus clearing more balls and sending the chain further back.

Along the way you can pick up various power-ups that will aid your progress. These range from the fairly basic ‘slow’ that slows down the main chain; and ‘reverse’, that sends the chain moving backwards; to the more powerful ‘bomb’ which takes out a section of the chain; and ‘lightning’, which allows you to clear the chain of all balls of a specific colour. You’ll also find score multipliers popping up on regular occasion. 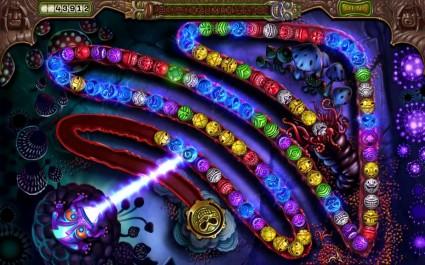 Zuma’s Revenge has four game modes, the main one being Adventure mode which is played across sixty levels. The game is set up in six worlds, which culminate with a boss battle that requires you to fire balls past the chain to hit the boss on the opposite side of the screen.

Each level gives the opportunity to win up to three gold coins. The first is for completing the level while the other two are for beating a par on score and time taken, which become more challenging as you progress. These coins can then be spent on one of four spirit animals that give you a boost.

These spirit animals add an additional layer of tactics to your game, as you must decide where to strengthen in order to make your progress as smooth and progressive as possible. The Monkey makes bonus fruits appear more often in each level and also adds to the points value applied to hitting the fruit with one of your balls. This is followed by the Cheetah which increases shot speed, Rabbit for shot power and finally Hawk, which gives an overall score boost for each level.

Once you have completed the main Adventure mode you will unlock two additional modes. Iron Frog is a gauntlet mode that gives you a single life to beat ten levels of increasingly challenging chains. Boss Rush asks you to take on the ten Adventure mode bosses back-to-back against the clock. Both prompt a slightly different style of play to the main mode and help give a replay value to what is otherwise a very short-lived affair. 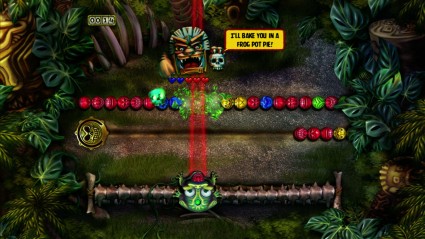 The final game mode on offer is the Weekly Challenge, which sets random challenges for you to compete in and set leaderboard markers for your friends to try and beat. These challenges are reset (you guessed it), weekly.

Frogspawn
As you’d expect from a PopCap title, Zuma’s Revenge is full of bright, crisp colours and some nicely-drawn backdrops that give the game a very welcoming feel. However, if you are looking for groundbreaking technical vistas that push the limits of the 360, you’re going to be disappointed.

The style of the game doesn’t give much scope for animation, but the game is supremely responsive at all times. There is absolutely no chance you could blame your failings on a spot of slow down or a graphical glitch, as it plays as smooth as a baby’s bottom.

Zum zum
As with the visuals, the sound is nothing really to write home about. Like the original, the game has an Aztec setting and the music follows. Hand drums and pipes sit comfortably in the background, setting a scene without ever really affecting the atmosphere. 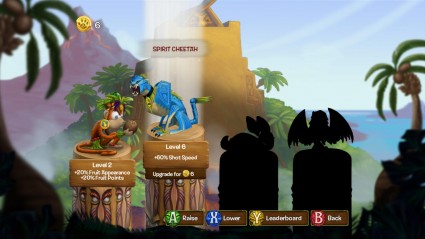 Balls fire off with a sort of ‘whoosh’ and connect with a fairly hollow-wood kind of ‘pop’. Aside from that the sound effects are pretty scarce on the ground, though the bosses do squeal a bit when hit.

Balls of steel
Zuma’s revenge is one of those lovely little arcade games that will give you something to do and keep you entertained in short bursts over a long period of time. As with all successful puzzle games it pitches itself perfectly in the simple to play, difficult to master category, while looking bright and colourful along the way. It never offends and only rarely frustrates, but even then it does so in a way that simply makes you want to try again.

That’s not to say it will be for everybody, nor is it the best of its kind on the marketplace. I’d even argue that due to its sheer simplicity, at 800MP it might still be overpriced, but it’s definitely worth a look for puzzle fans.