I’ve always been a big fan of superhero stories, especially within the Marvel and DC worlds. So when InFamous was first announced, I was massively excited the idea of a free-roaming superhero game where morality would also play a part.

The PS3 games have long since passed, and Cole with them, but now on PS4 we’ve had Second Son with its new hero Delsin, who divided opinion greatly. One thing that I’d like to think was beyond argument though was that of the new powers available to the beanie-hatted one, neon was by far the coolest. With that in mind, nobody can blame Sucker Punch for making their standalone DLC, First Light, concentrate on the giver of this power, Abigail “Fetch” Walker, making for a brief but enjoyable return to Seattle…

Going back to those DC and Marvel superheroes, my favourite character is probably The Flash (in his original Barry Allen form, and yes I am looking forward to the new TV show), so having the ability to zip around a city at superspeed is an instant hook for me. It’s great fun, and looks incredible on PS4 with the neon really singing, being the undoubted highlight of this particular power set. Playing as Fetch is great fun, and I didn’t miss Delsin’s other powers at all. In the same way, I can’t say I missed Delsin all that much either, although I didn’t dislike him as much as some.

Aside from that speed boost, neon works similarly to Delsin’s version of it. Time slows as you shoot, you can fire stasis bubbles, and you also get a large scale attack; although this is different to Delsin’s and there are one or two further minor differences as well. The skills are fun to play around with, even if they still follow along similar lines to all previous games in the series by and large. If there’s to be another InFamous, one thing I would like to see is a bit more diversity in powers rather than just shooting all the bad guys.

First Light tells Fetch’s back story, focusing on what happened to her unfortunate brother Brent, and her time at the Curdun Cay facility. This cleverly works in a series of battle arenas that you can later go back to, to try and best your mates’ high scores. I found these got a little chaotic and I felt no great desire to go on the high score attack. 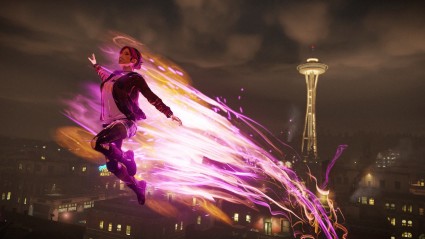 Just like Second Son, First Light is a stunning game to behold. Shiny…

Along the way, Fetch will also complete side quests similar to those found in Second Son (rescuing people, destroying drones, and so on), whilst progressing through a story that only takes a few hours to finish. Seattle is still fun to get around, although you only have the first side of the map here not the section across the bridge, so there’s less area to cover. As often seems to be the case with InFamous though, some of the main story missions are less interesting than what else is on offer, largely requiring you to take out groups of enemies. There’s nothing particularly new, including missions where you have to defend vehicles from atop, a mission type that I must say I’ve never greatly enjoyed.

Fetch, shunned by her parents once they realised she was a conduit, makes for a far more engaging hero. She comes across as vulnerable initially, but once she gets into her stride and embraces her powers, she gains a bit of swagger. When things take a turn for the worse, she isn’t afraid to take herself to a fairly dark place, which then informs how we meet her as Delsin in Second Son. Her story fits the wider tale well, and she is definitely easier to empathise with overall. 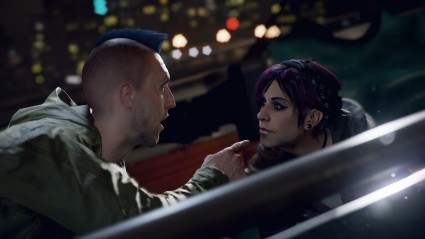 Fetch with her brother Brent before things go decidedly south, and no I don’t mean they go to San Francisco…

It’s worth noting that there is no morality system here, and while this does remove some player agency, in a way this works for the better. Morality systems can be interesting but InFamous’ version has always been too simplistic, too binary, especially in the way it fed into the powers you could unlock. Removing that, in many ways, makes for a more human tale. Let’s be honest; most of us don’t always make the right decision, and with some notable exceptions, even the salubrious among us are capable of doing some right occasionally.

Over in a Flash

Overall, First Light is brief, but a fun and worthwhile addition to the InFamous series, with a more likable main character and without some of the baggage that comes with the main games in the series. It doesn’t hurt that it comes with the most enjoyable power Sucker Punch has come up with so far, either. The main missions aren’t anything new at all, and there’s room for improvement there, but overall this is worth your time. If you missed out on Second Son because you didn’t like the look of Delsin, now’s the time to spend some time in Seattle.